With our diverse, “all-of-the-above” approach to energy development, North Carolina has enjoyed some of the lowest electricity prices in the nation for the last two decades. To maintain that advantage for our citizens and job providers, we need a forward-looking energy policy like the state House passed recently in House Bill 951. 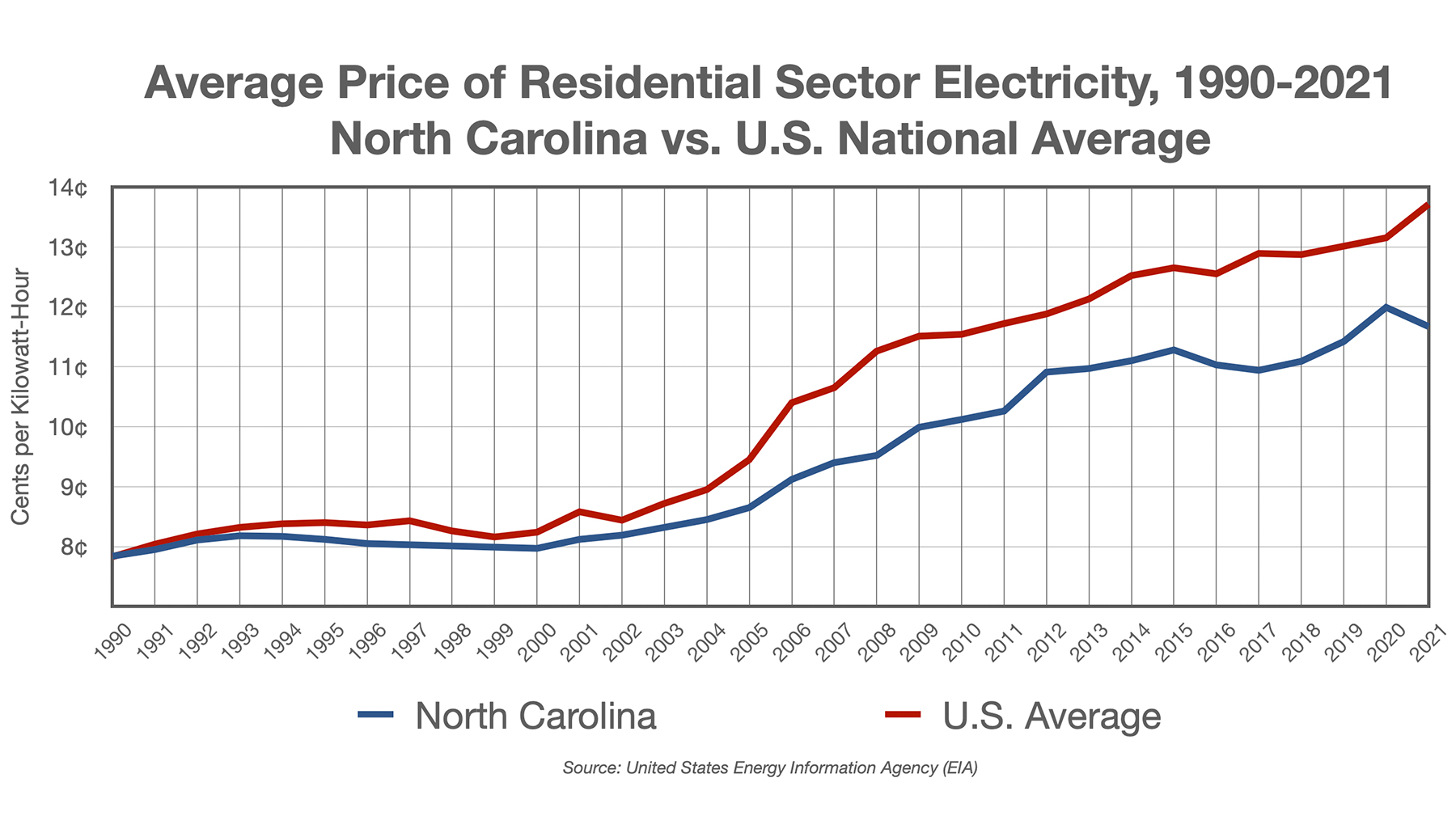 First some context: as of April 2021 (please see Appendix I at the end of this post) North Carolina has: 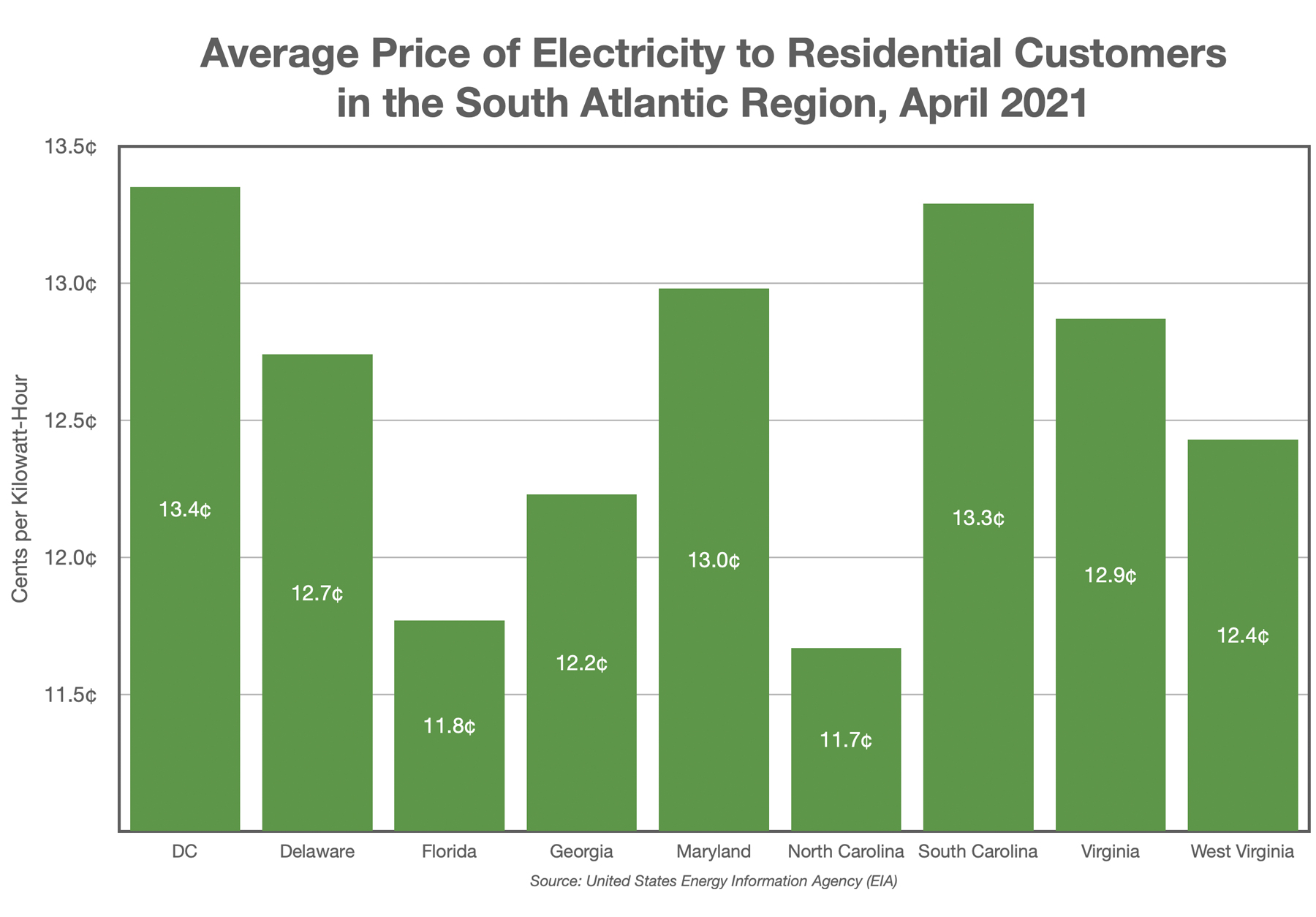 Moreover, North Carolina has become a leader in the use of clean energy. The Old North State ranks sixth among the states in the production of electricity from carbon-free nuclear power and ranks second behind California in the amount of total installed solar power generating capacity.

But unlike North Carolina, electricity prices rose seven times more (39 percent) in California between 2011 and 2020 than they did in the rest of the country on average (five percent), according to the U.S. Energy Information Administration (EIA). The major reason behind California’s high cost of electricity is that state’s decision to close all 12 of its nuclear power plants, according to climate activist Michael Shellenberger. And as a result, California did not have enough power to meet the demand, causing unscheduled blackouts across the state last year.

The big distinction? Nuclear power. Nuclear power is North Carolina’s largest source of electricity generation (38.7%), followed by natural gas (25.9%) and coal (15.2%). Hydroelectric power, our largest source of renewable energy, accounts for 5.8% of all electricity generation in the state. All the other forms of renewable energy combined (solar, wind, and biomass) are 14.3% of the total. 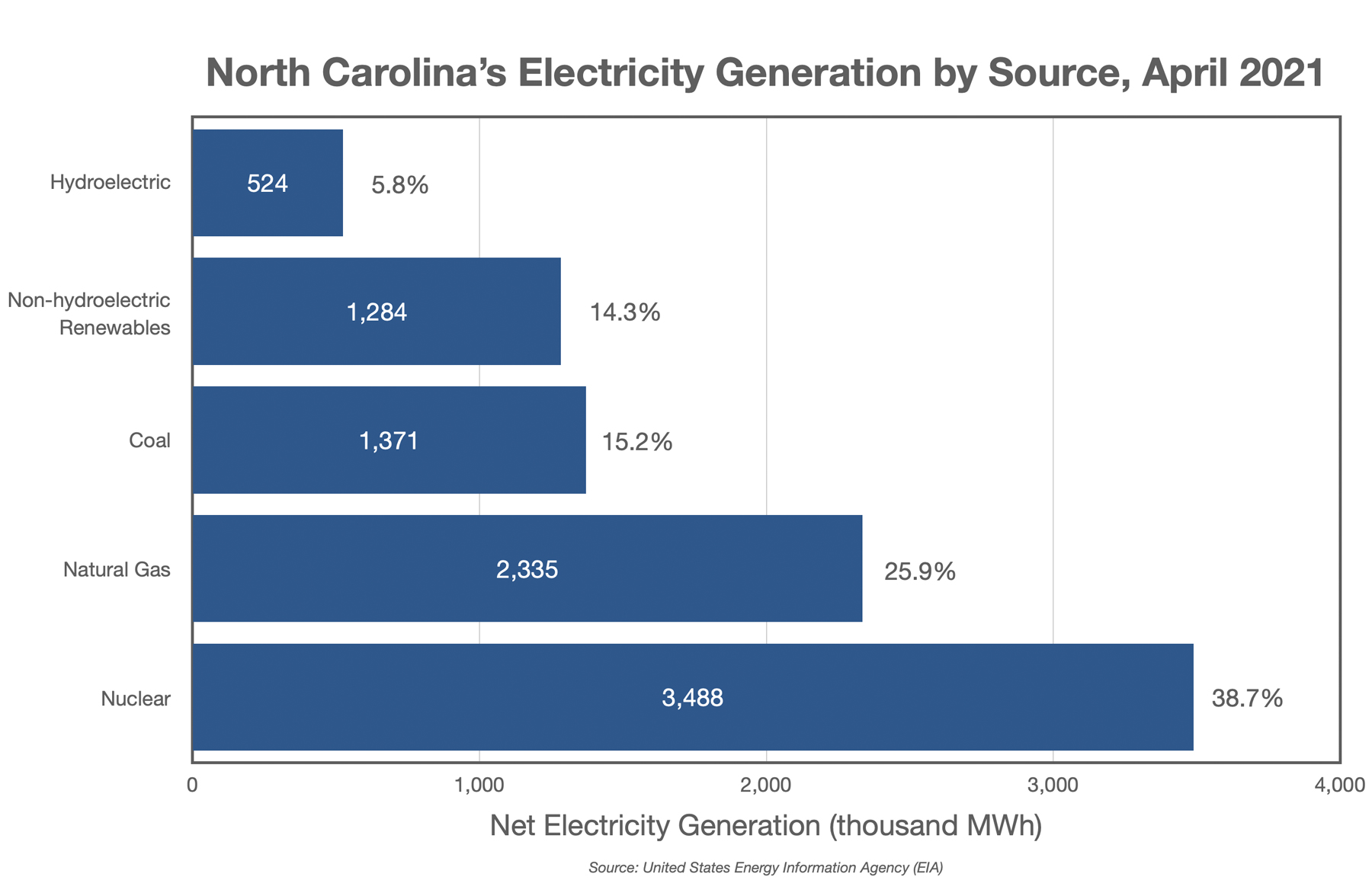 Comprehensive legislation has emerged from the state House that builds upon this legacy of affordable, reliable electricity by taking North Carolina’s energy policy through the next decade and beyond.

House Bill 951 — which the Public Staff of the North Carolina Utilities Commission estimates will contribute to a 64% reduction in carbon dioxide emissions (CO₂) from the electric power sector in North Carolina by 2030 (from 2005 levels) — passed with a bipartisan majority and now awaits action in the Senate.

And why does that CO₂ reduction matter?

According to the N.C. Department of Environmental Quality‘s most recent (2017) Greenhouse Gas Inventory, the generation of electricity by the electric power sector (and its subsequent use) contributed the most to greenhouse gas emissions in North Carolina — accounting for 35% in 2017, followed by transportation (32%), residential, commercial and industrial (RCI) combustion (14%), agriculture (7%), waste management (6%), industrial processes (5%), and natural gas and oil systems (1%).

According to the most recent data available from the U.S. Environmental Protection Agency, in 2019, carbon dioxide emissions accounted for 80.1% of greenhouse gases. Methane accounted for 10.1%, nitrous oxide 7%, and 2.8% were other fluorinated gases. 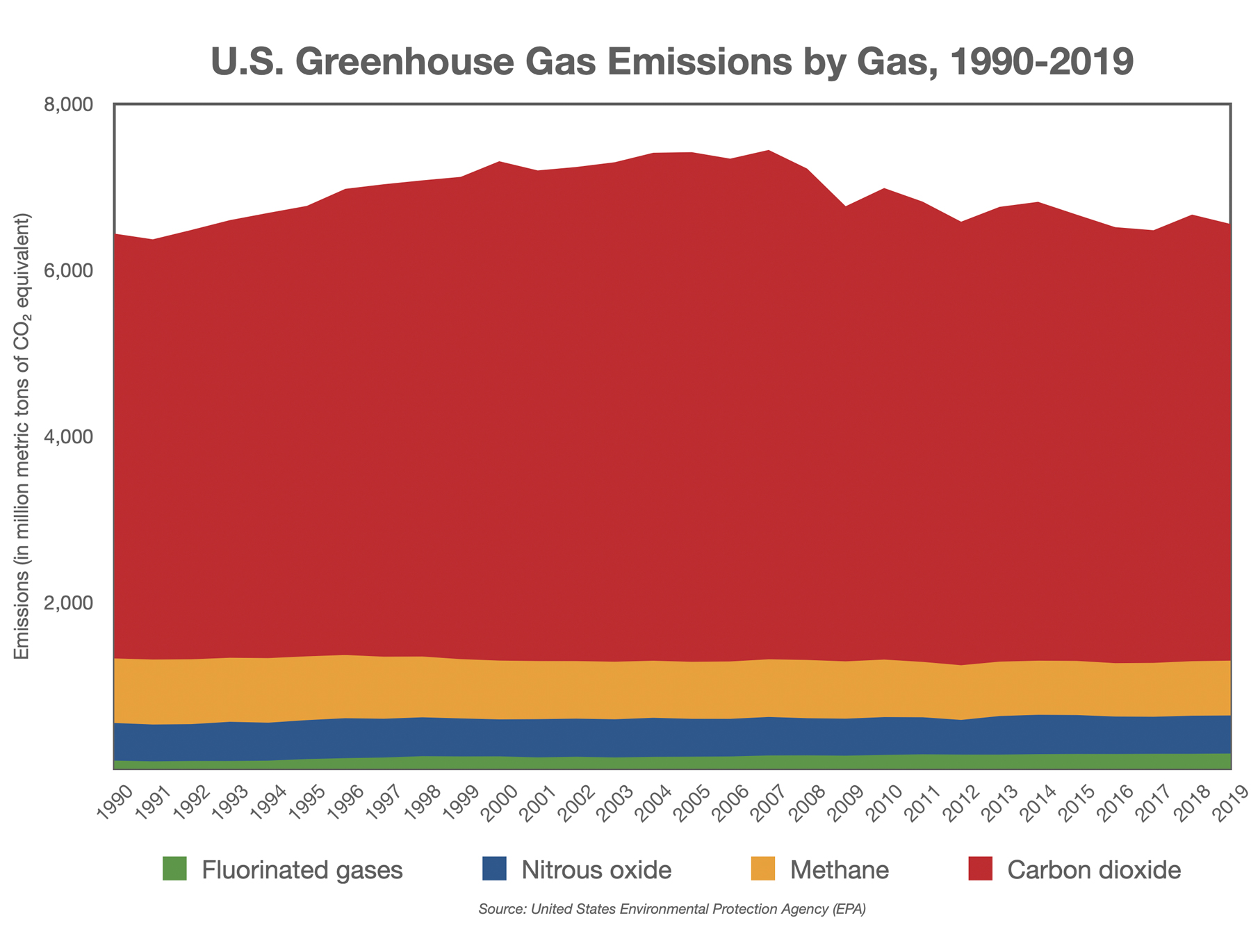 For some perspective, the EIA reports (the most recent data is from 2018) that North Carolina ranks 11th among the 50 states in energy-related CO₂ emissions, at 124.4 million metric tons (MMT) of the 5.281 billion metric tons (BMT) being emitted in the United States, or roughly 2.4% of the national total. At 681.9 MMT, Texas ranks the worst and is responsible for nearly 13% of the nation’s carbon emissions. The Union of Concerned Scientist’s latest figures on each country’s share of carbon emissions ranks the United States behind only China in the world’s carbon emissions, at 15% and 28%, respectively.

In a nutshell, “the plan seeks to foster the right mix of energy generation sources to maximize reliability and cost savings for consumers, and minimize environmental impacts and lower our carbon footprint,” according to Representative Dean Arp, a primary sponsor of the legislation.

Most notably, the bill continues the phase-out of the use of coal, the burning of which is the source of nearly 50% of the world’s CO₂ emissions, at five of six coal-fired facilities across the state. This process first began in 2011 and has since seen nearly 30 coal-fired facilities retired.

At the Marshall plant in Catawba County, the coal will be replaced entirely with natural gas, a reliable and inexpensive fuel which emits just half the CO₂ of coal; the Allen plant, across the Catawba River from Charlotte, will install a competitively-procured 20 megawatt battery that utilizes innovative, grid-scale storage technology powered by the construction of a large-scale solar farm. Renewables, including energy from solar and wind, require 300-400 times more land than do natural gas and nuclear plants. From Bloomberg News:

“Expanding wind and solar by 10% annually until 2030 would require a chunk of land equal to the state of South Dakota, according to Princeton University estimates and an analysis by Bloomberg News. By 2050, when Biden wants the entire economy to be carbon free, the U.S. would need up to four additional South Dakotas to develop enough clean power to run all the electric vehicles, factories and more.”

The Utilities Commission will hold public hearings to determine the most cost-effective, reliable, and environmentally-friendly replacement for the other three coal-fired plants from an “all of the above” menu of cleaner fuels including natural gas, nuclear, solar, and high-capacity battery storage.

HB951 increases the electricity grid’s use of renewable sources by expanding upon a law passed in 2017 which opened the procurement process to market competition. That initiative, “Competitive Energy Solutions for NC,” has already saved North Carolina’s ratepayers over $360 million thus far and which is projected to save nearly $850 million through the next decade. That bill also created various solar programs to which HB951 adds significant additional capacity.

North Carolina’s five nuclear reactors, the first of which came online in 1975, produce 75% of the state’s carbon-free electricity. Nuclear energy has the highest capacity factor of any other energy source on the planet at 93.5%. Essentially a measure of reliability, it means that our nuclear power plants work around the clock producing maximum power more than 93.5% of the time (a power plant with a capacity factor of 100% would mean that it is producing power all of the time). By comparison, natural gas has a capacity factor of 56.8%, hydroelectric at 39.1%, coal at 47.5%, wind at 34.8%, and solar at 24.5%. 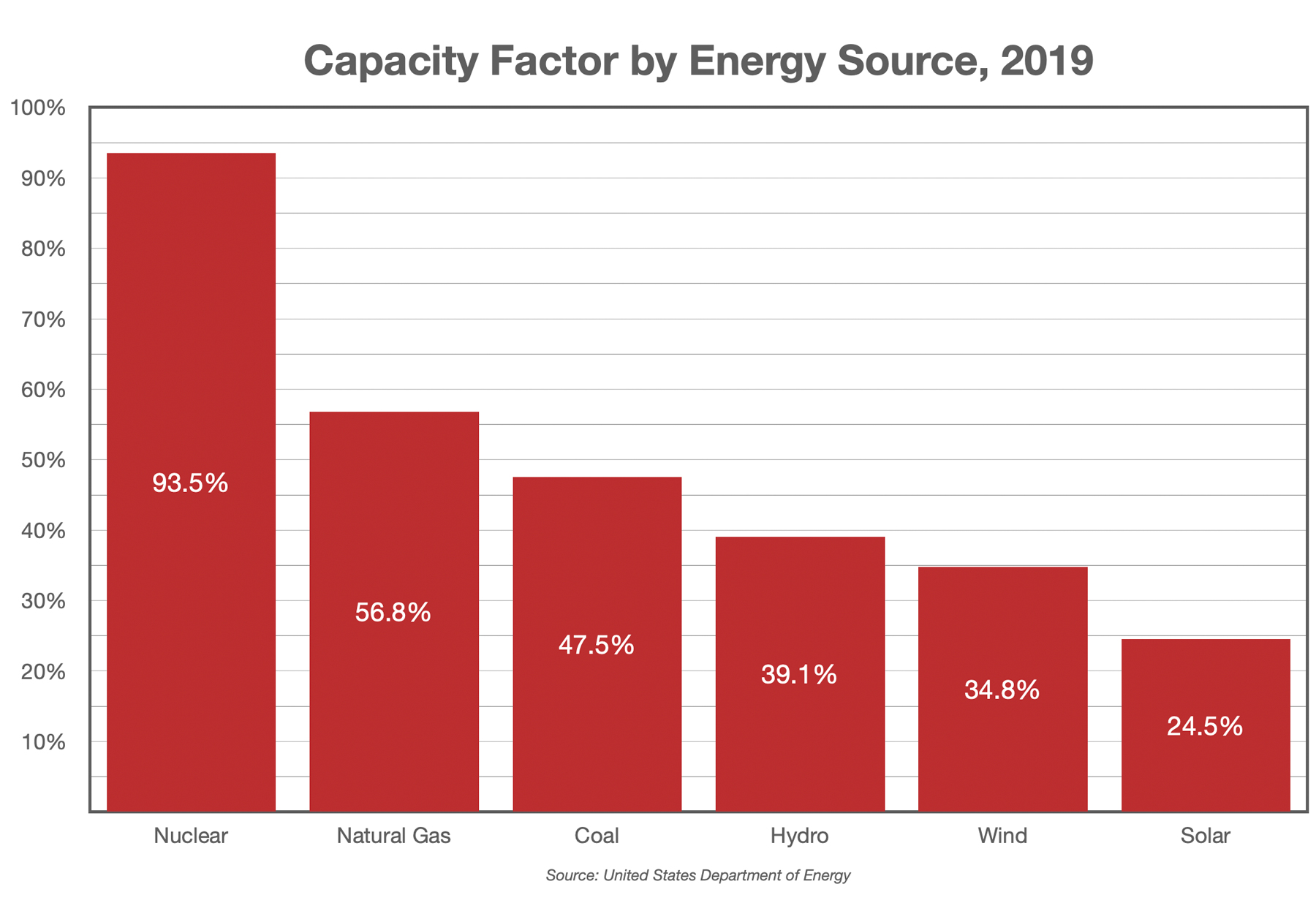 “The unique combination of benefits for nuclear energy are compelling,” said former New Jersey governor and co-chair of the Clean and Safe Energy Coalition Christine Todd Whitman. “It is the only electricity source that operates 24/7, has industry-leading reliability, is affordable with production costs cheaper than coal and natural gas, and does not produce air pollutants or greenhouse gases when producing power.”

Exciting advances are underway in nuclear power, including a pebble bed reactor that can’t melt down and Gen IV reactors that “eat” their own radioactve waste as fuel.

And we’ll bet you didn’t know that nuclear power is already the safest of all the energy sources to boot.

“We are encouraged to see proposed legislation that helps North Carolina transition to a more diverse portfolio of energy resources at a pace that ensures balance and allows us to continue delivering reliable electricity across the state, containing costs for our consumer-members and achieving long-term sustainability goals,” commented a spokesperson for North Carolina’s Electric Cooperatives (NCEC), a coalition of non-profit cooperatives which operate across the state. “We support this bill’s strategic promotion of a reasonably paced buildout of diverse energy resources that will help us achieve our long-term sustainability goals without sacrificing affordability and reliability.”

The NCEC is right. A common-sense, balanced approach to energy policy will help consumers and businesses.

Appendix I:
Average Price of Electricity to Ultimate Customers by End-Use Sector, by State
May 2021 and 2020