Last week, we released the first batch of findings from a poll recently conducted for us by Meeting Street Insights. While those results focused on the general political environment in North Carolina (utilizing a sample set of 500 registered voters proportional to the state’s registration breakdown of Democrats, Republicans, and Unaffiliated voters — and then weighted for off-year turnout), today we will look at voters’ outlook on the overall issue agenda, while focusing specifically on the economy (and including state taxes).

Subsequent posts will look at the impact of COVID-19, the public school education in North Carolina, and various other hot-button issues. 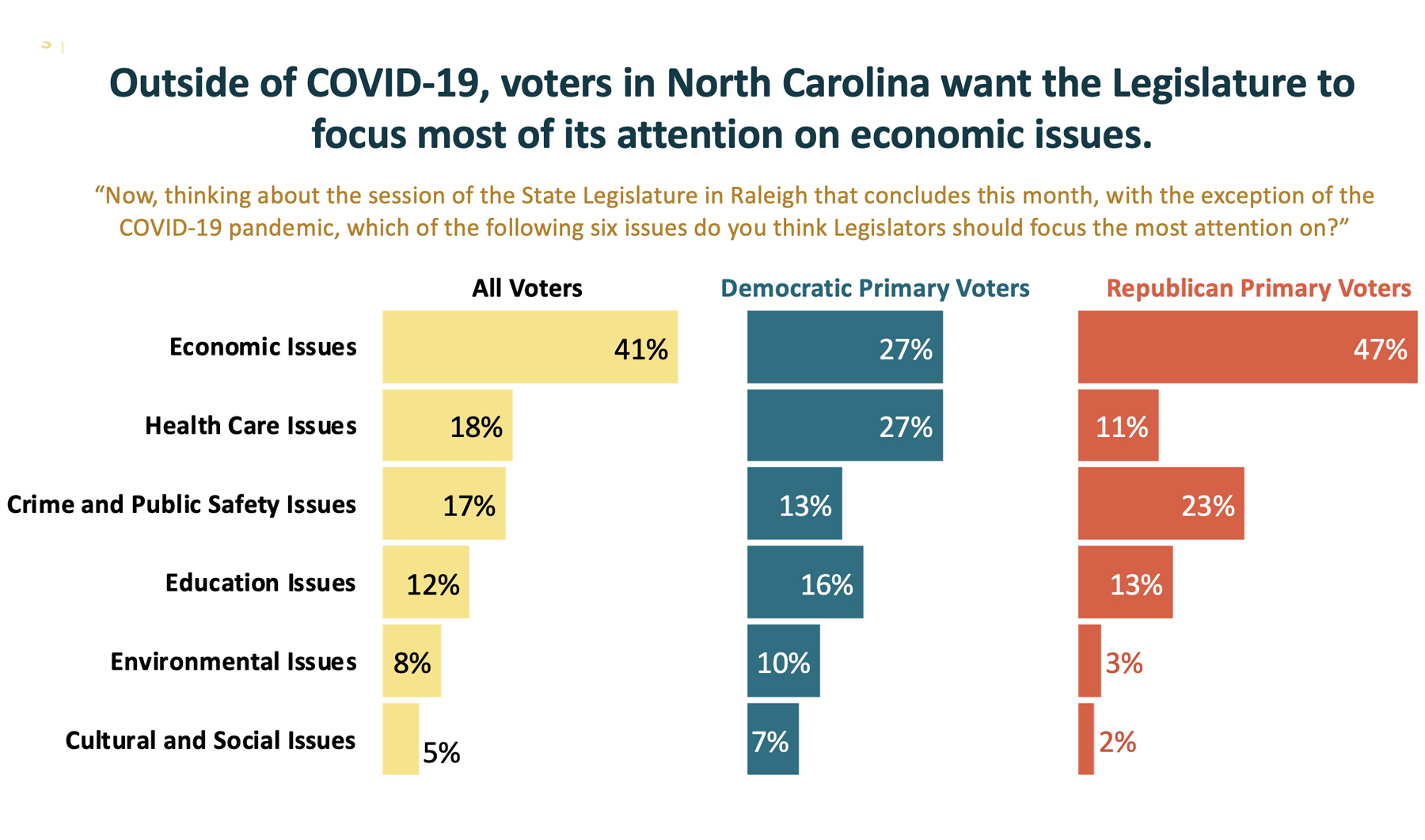 Other issues polled include crime and public safety, education, the environment, and social/cultural issues.

One way to interpret these results (and to drive campaign messaging) is to look at where each party is in terms of the relative importance of an issue compared to where the general electorate as a whole is. We consider this a baseline. And, since the general electorate includes approximately a third Unaffiliated voters (as does our sample of 500 registered voters), it is arguably a more accurate reflection of the electorate at large than is just a subset of Republican or Democrat primary voters.

Digging more deeply, we see that the two wings of each party (for the Democrats, the Biden vs. Sanders/Warren wings and for the Republicans, the Trump vs. the traditional GOP wings) see these issues differently as well — especially among Democratic primary voters. For example, 20% of “Biden Wing” voters rate crime and public safety issues as more of a priority — and closer to the Republican position — as compared to just 9% of the “Sanders/Warren Wing”. 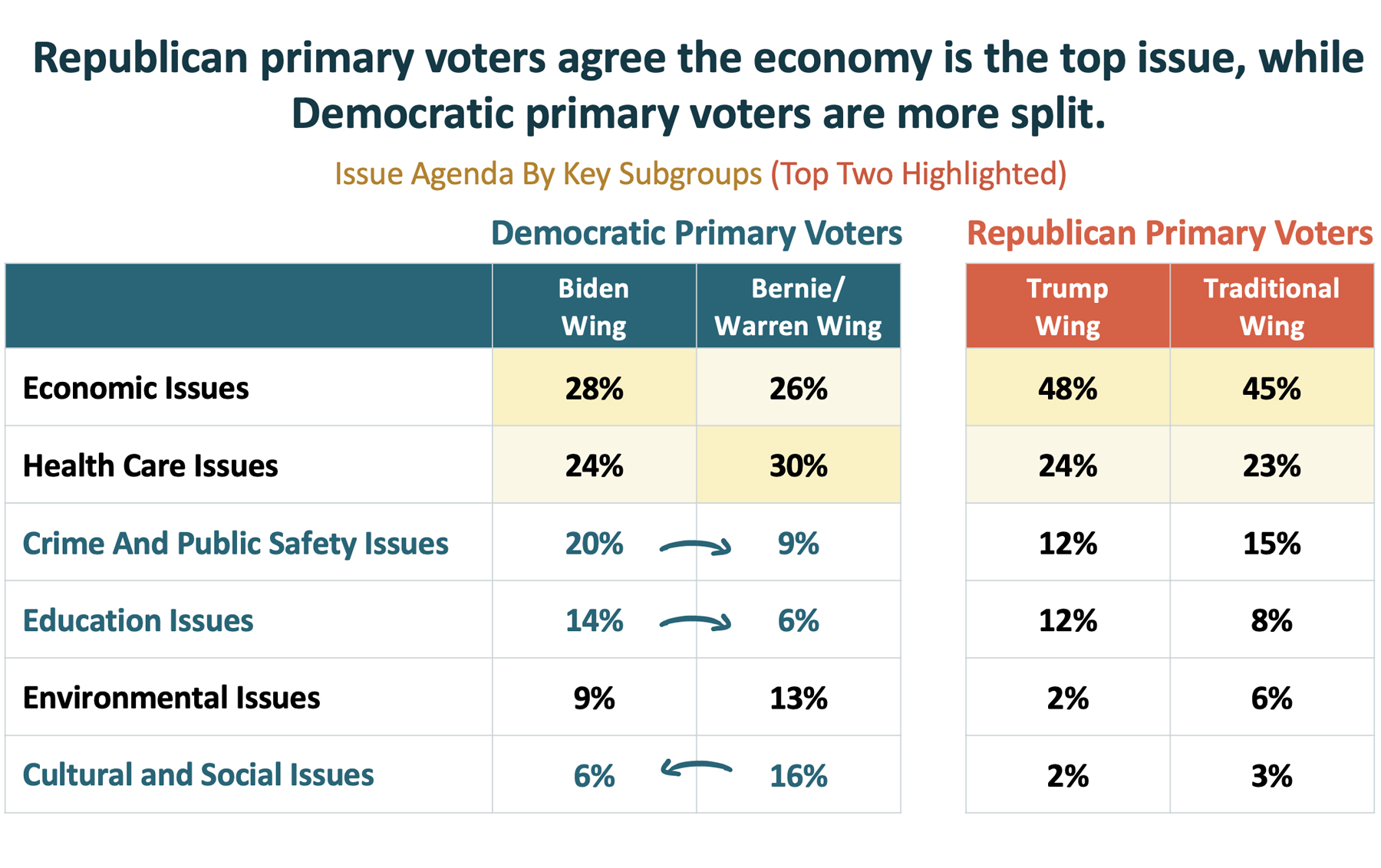 While these questions specifically addressed voter’s priorities for the state legislature, our next set of questions asked which party (Republicans or Democrats) in the state legislature would do a better job of successfully dealing with a wide range of policy items. They included 1) illegal immigration, 2) jobs and the economy, 3) inflation, rising prices, and cost of living, 4) taxes, 5) government spending, 6) keeping communities safe, 7) fighting for working families, 8) giving parents input into education, 9) helping the state recover from COVID-19, 10) public school education, and 11) healthcare. 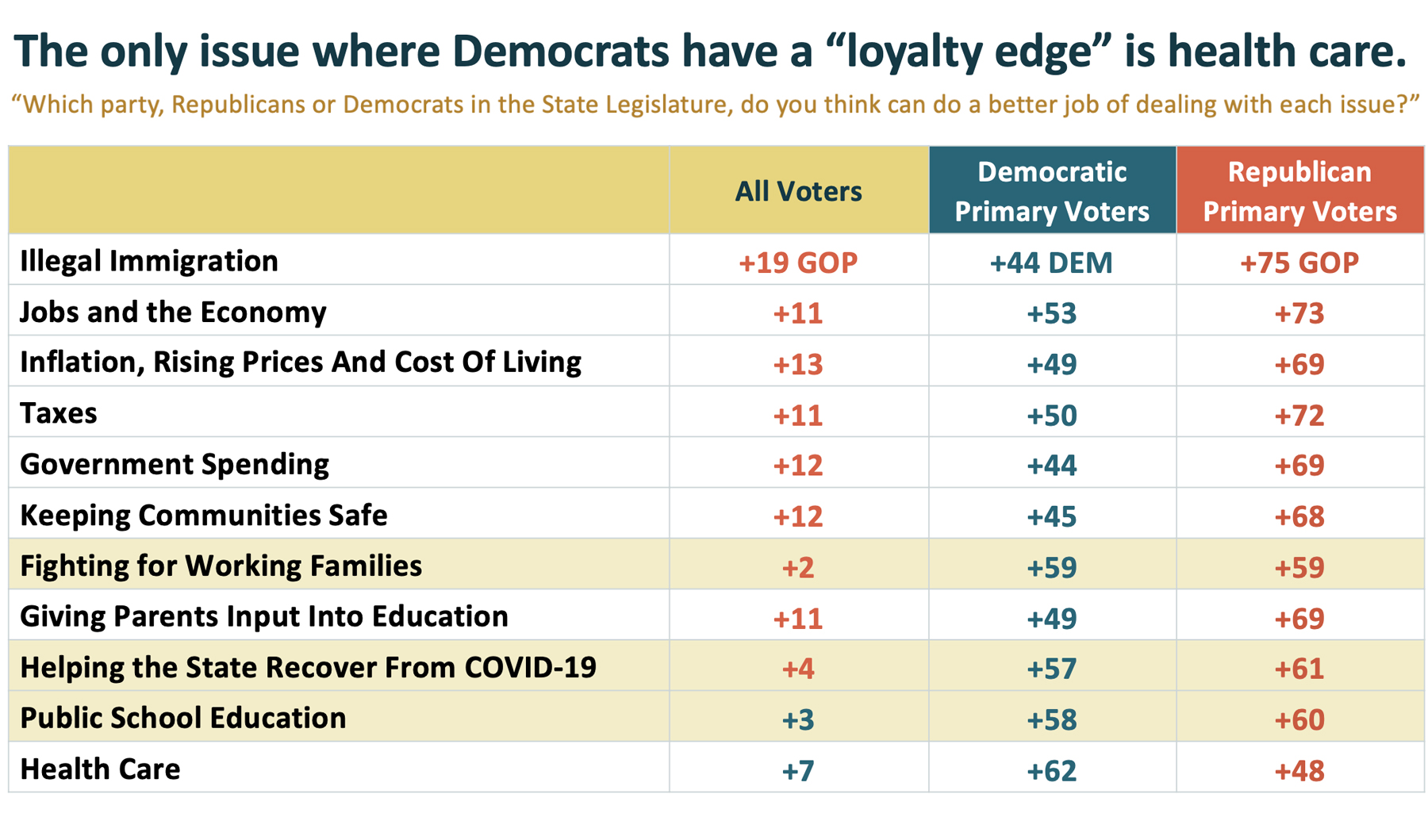 Unsurprisingly, Democratic and Republican primary voters both felt their respective parties would do a better job of dealing with most of the enumerated policy items, although on certain issues for the Democrats (illegal immigration, inflation, government spending, safety, and parental input on education) those numbers were under 50%.

Among all voters, respondents gave Republicans the edge on every issue with the exception of just two: public school education and healthcare, where Democrats prevailed (by three and seven points, respectively). Of the nine issues where Republicans had the edge, seven had Republican support in excess of ten points. 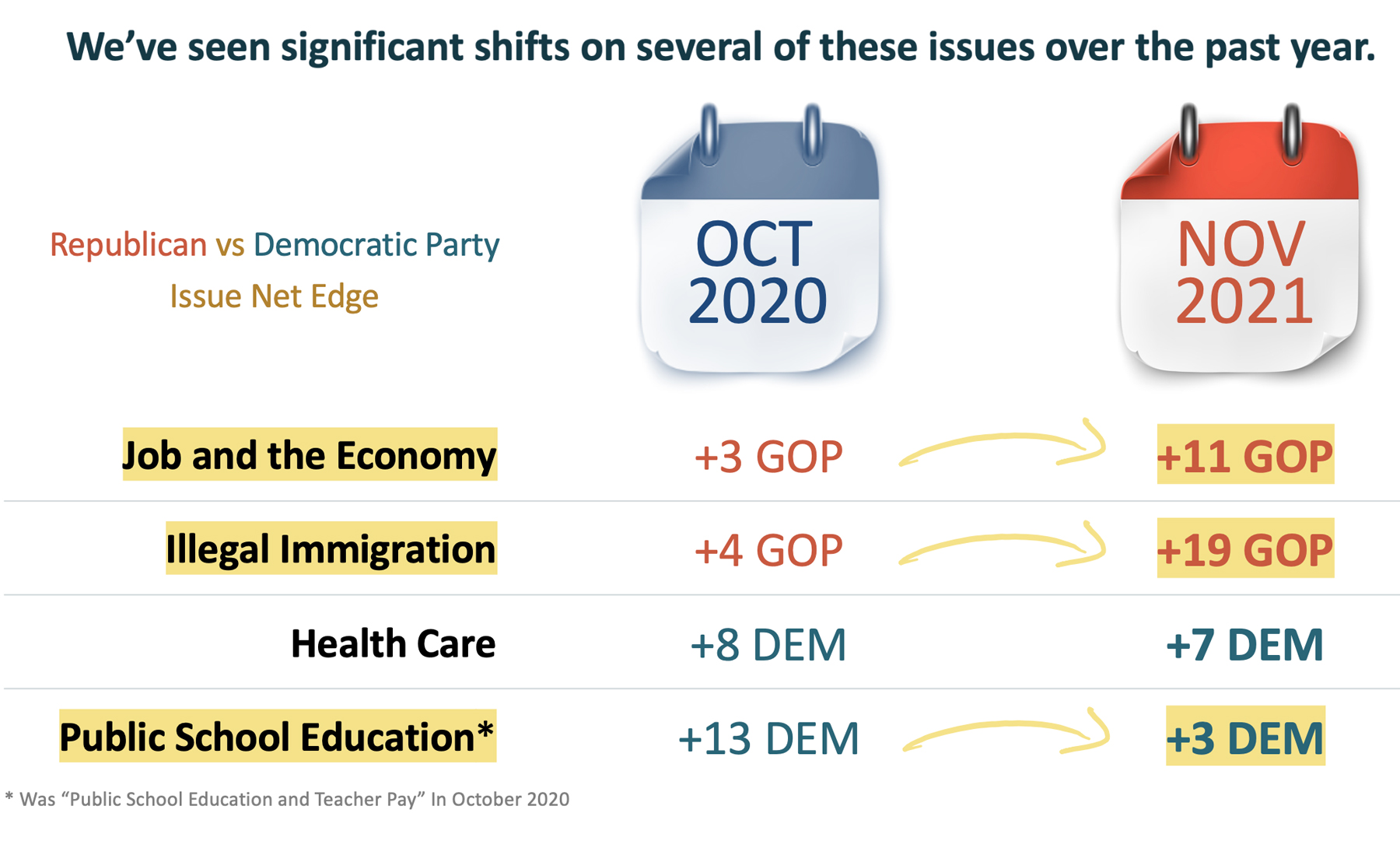 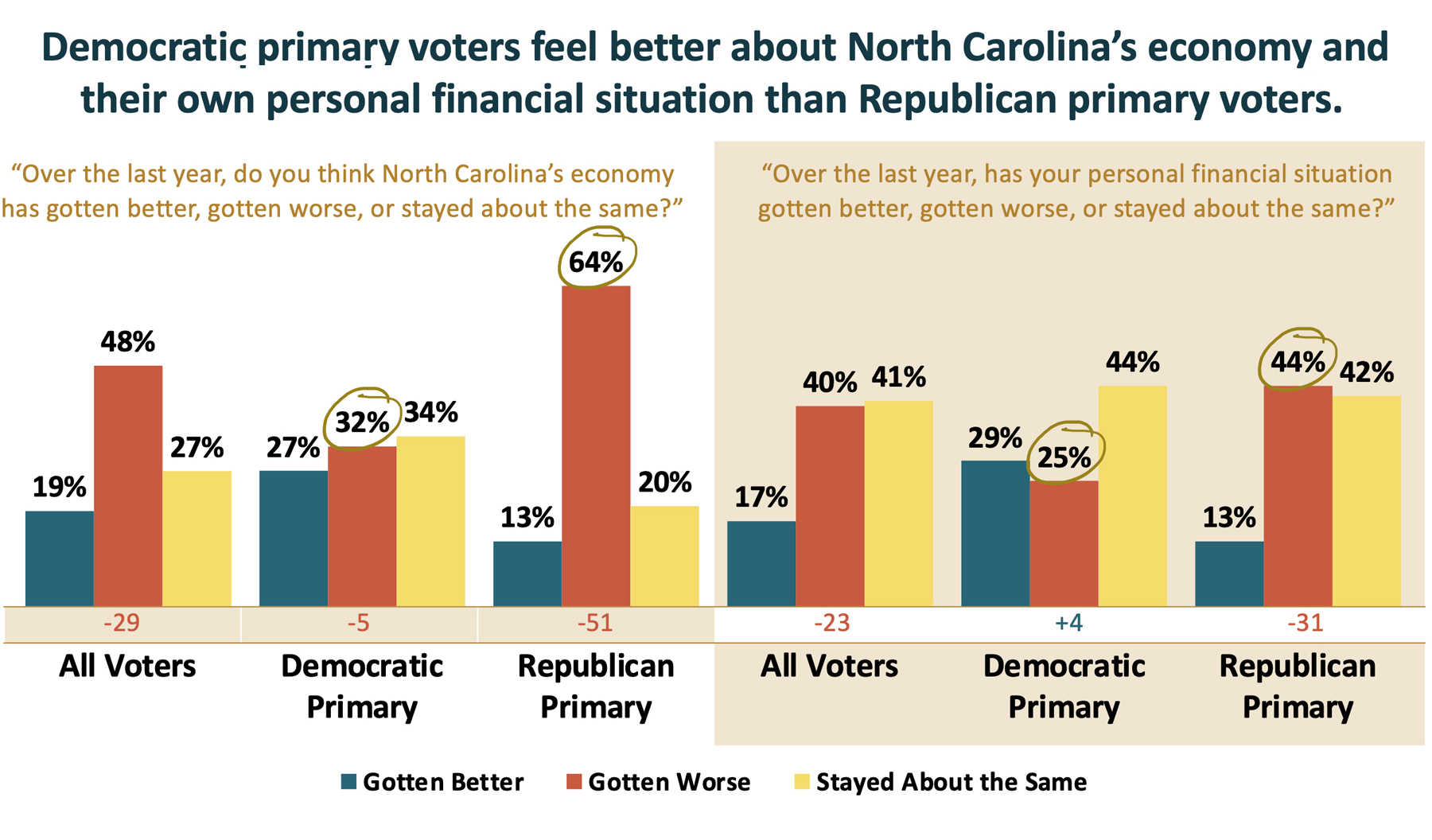 The “Trump Wing” of Republican primary voters is especially negative about both North Carolina’s economy and their own personal financial situations. 73% of Trump Wing voters said that the state’s economy has become worse over the last year and 60% said that their own personal situations have become worse (as opposed to 49% and 27% of of traditional GOP primary voters, respectively.) 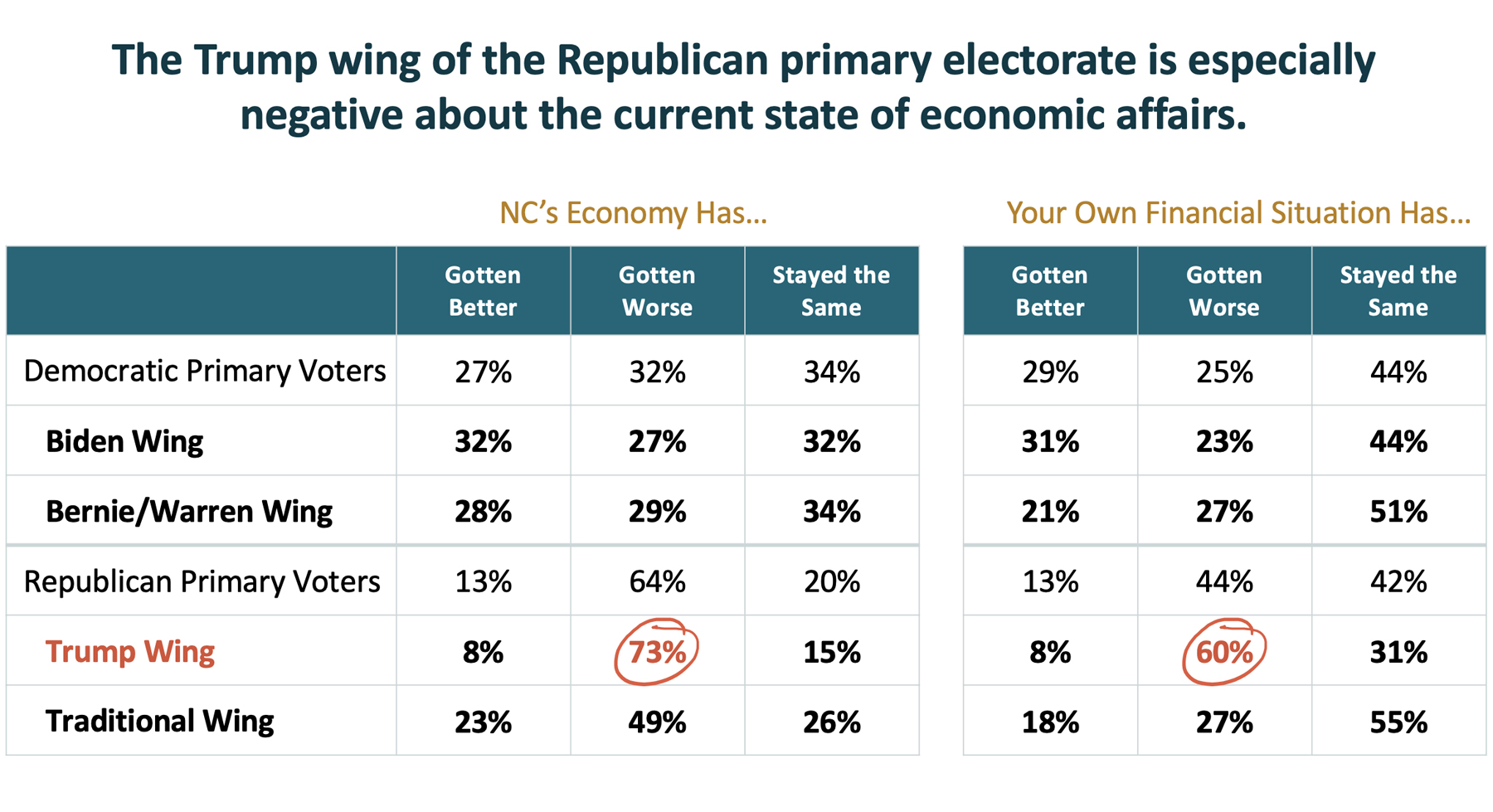 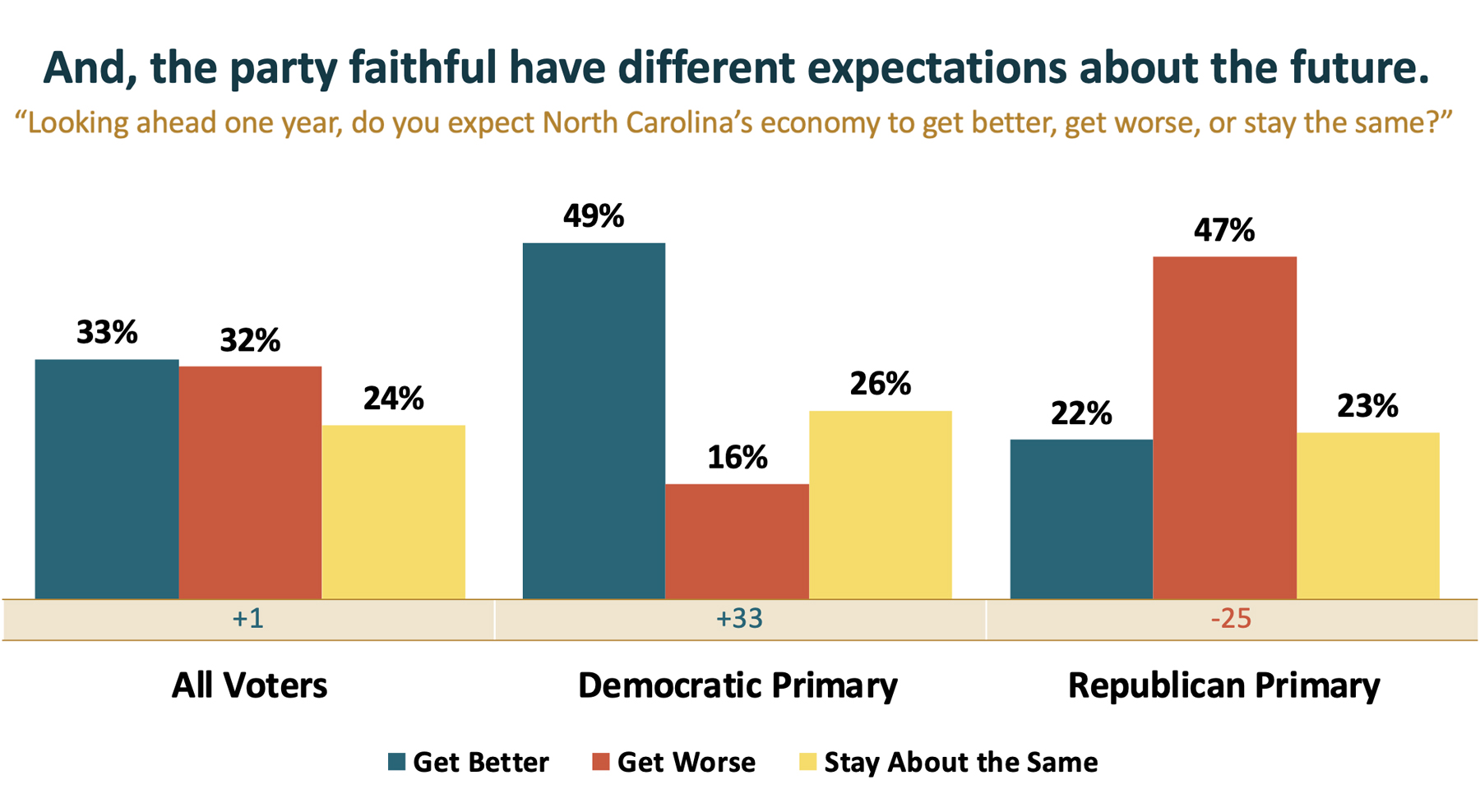 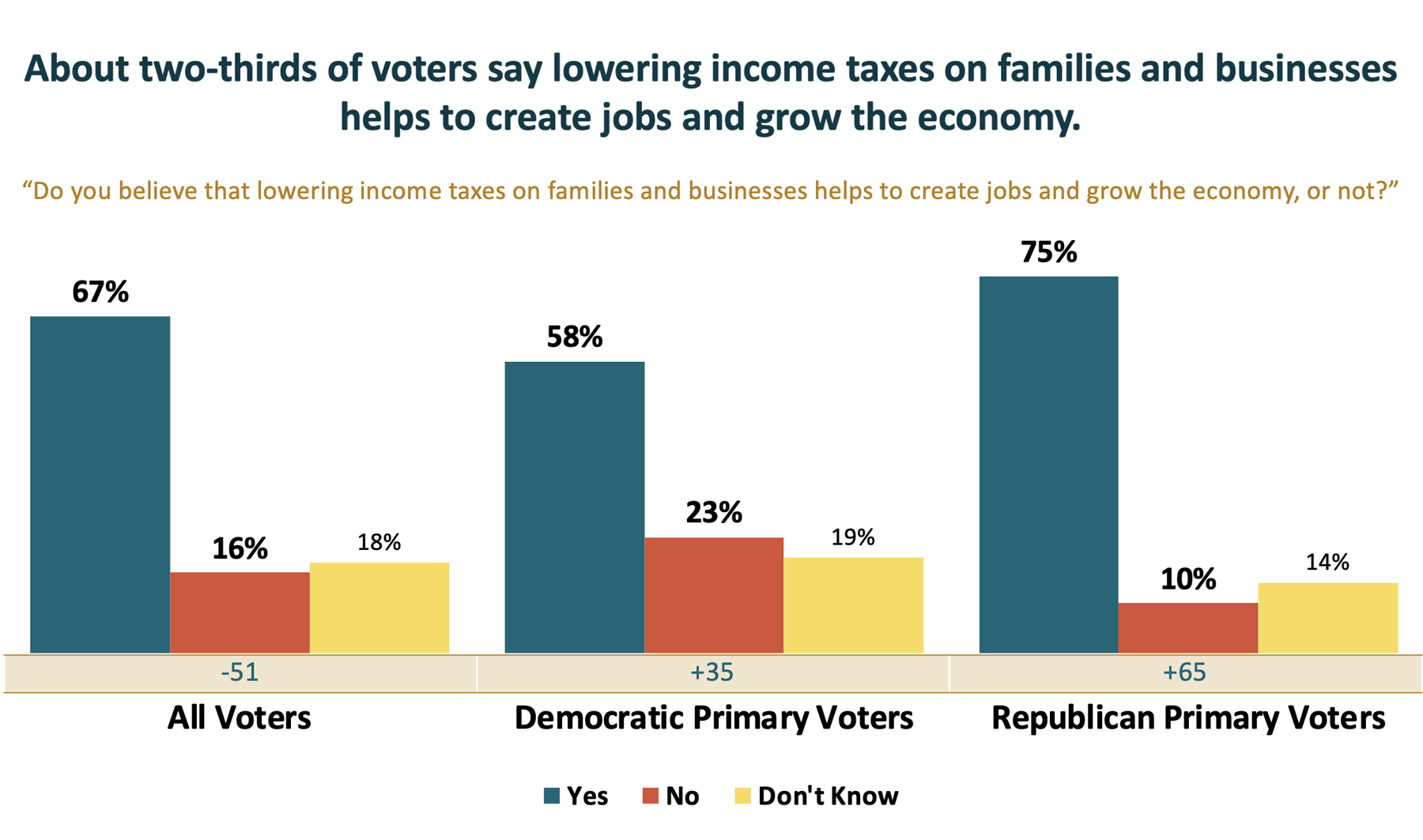 And a striking majority of those polled (74%) said that they support the tax cuts included in North Carolina’s most recent budget (with both Democratic and Republican primary voters more strongly supporting them at 78% and 76% respectively). 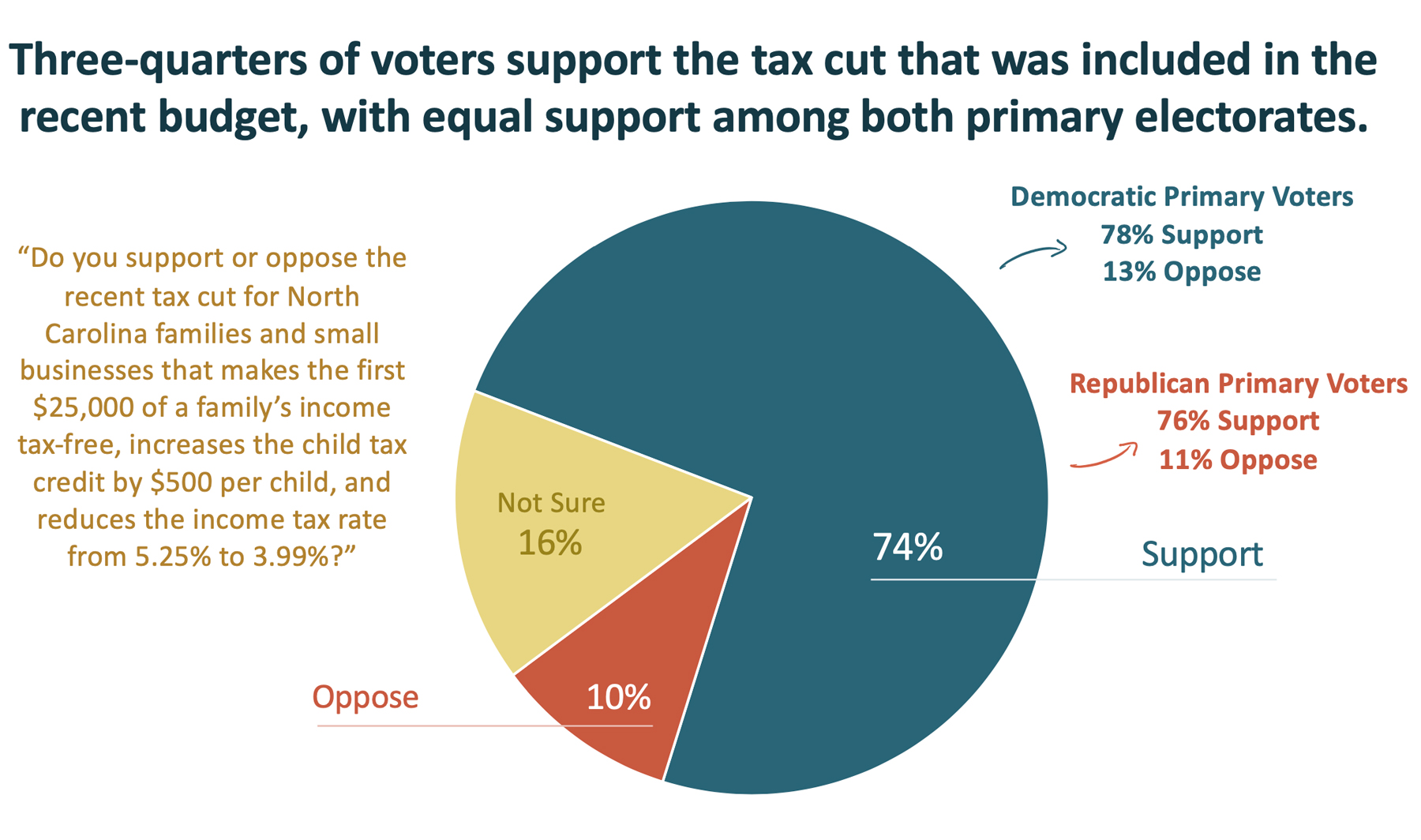 While respondents overwhelmingly support the lowering of state income taxes, 53% of North Carolina’s voters continue to believe that their state taxes have gone up over the last five years. In fact, since the conservative majority in the state legislature first enacted comprehensive tax reform in 2013, rates have been lowered incrementally from a high of 7.75% in 2010 to 5.25% this year. (Editor’s note: this year’s bipartisan budget lowers the personal income tax rate to 3.99% starting in 2026 and completely phases out the corporate tax rate by 2029.) 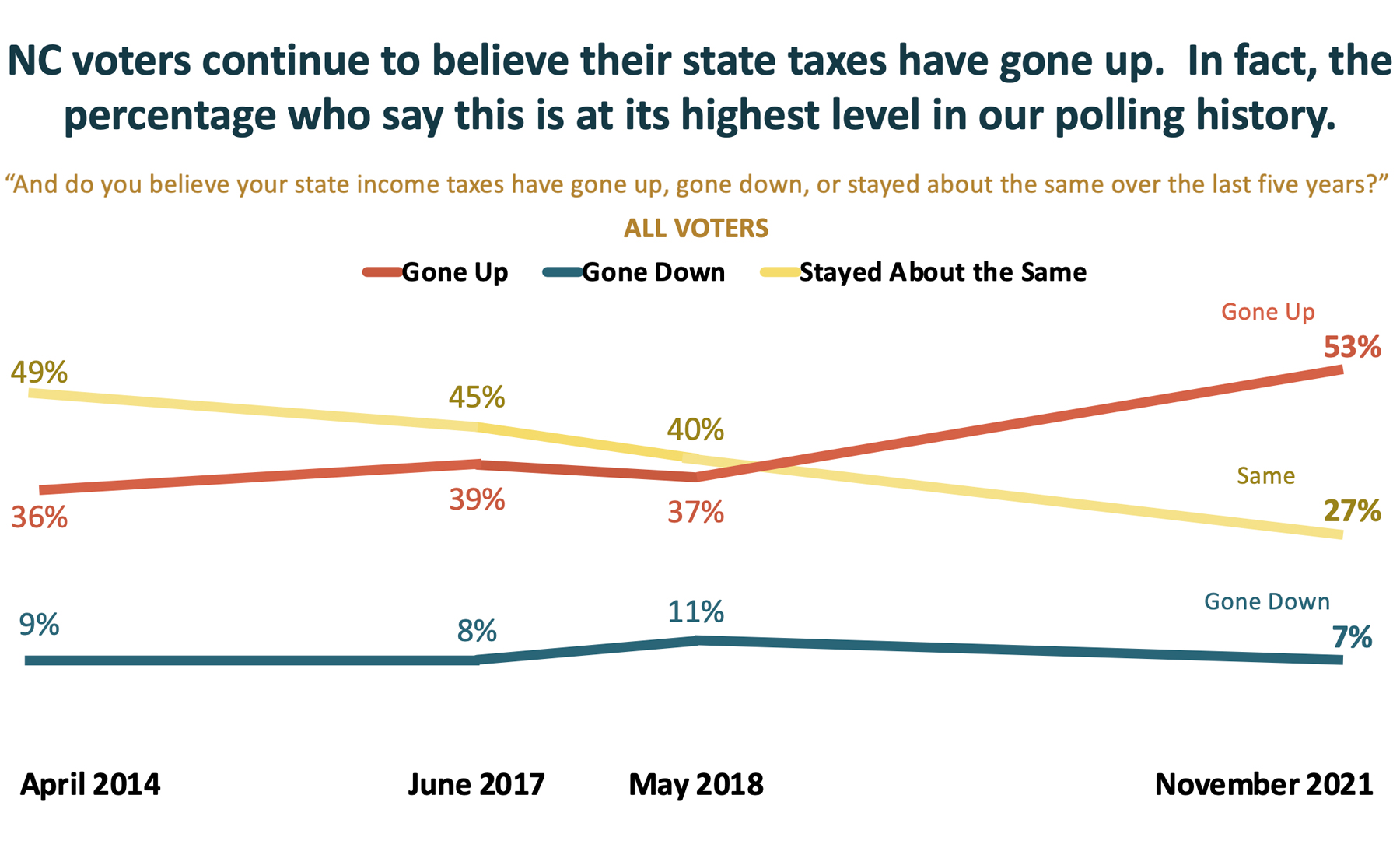 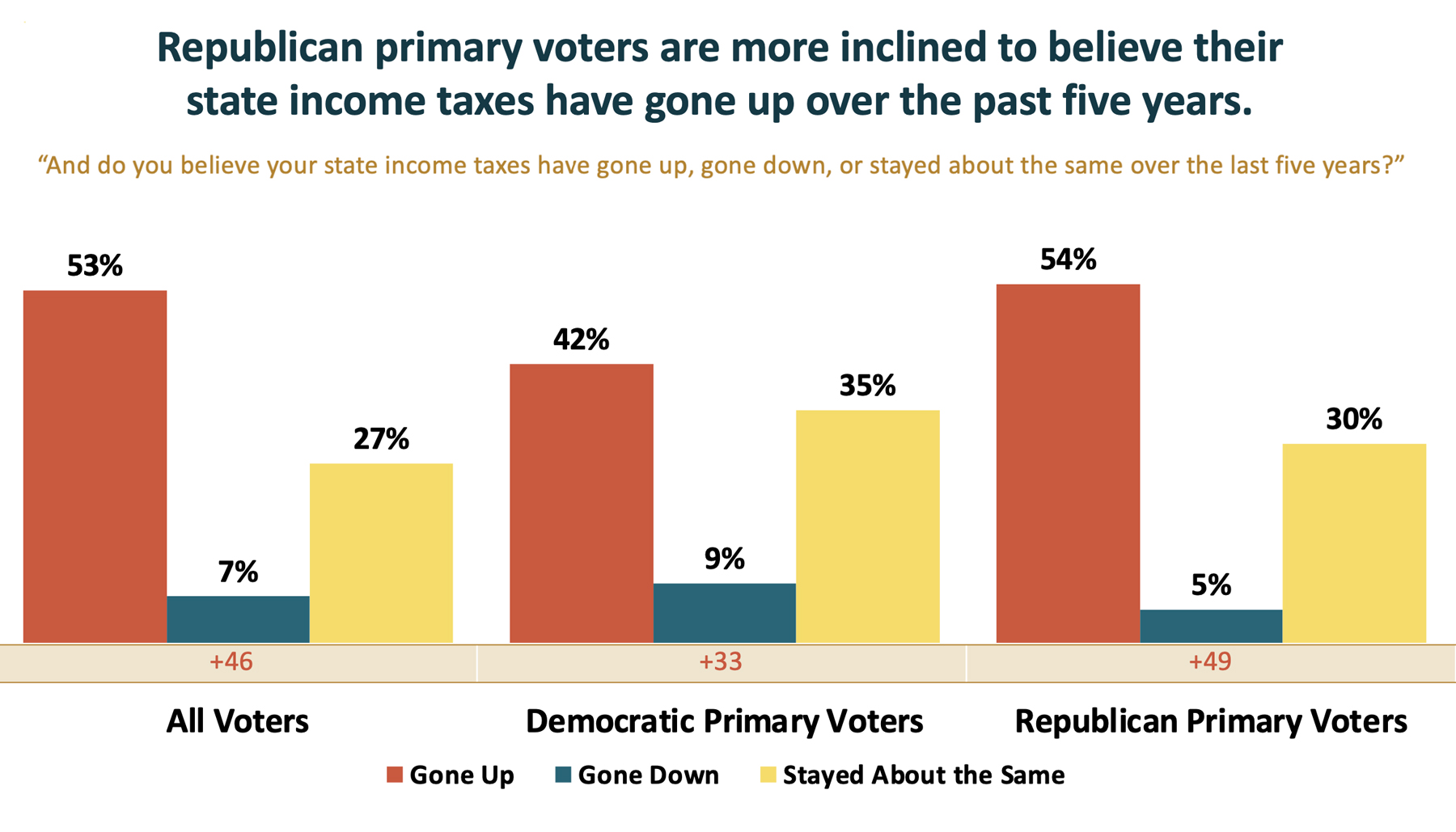