Legislation has been introduced in the North Carolina House that aims to fundamentally improve the way the dollar value of an Opportunity Scholarship is calculated. If enacted into law, the measure will further expand school choice options in North Carolina for economically disadvantaged children.

Opportunity Scholarships — often referred to as school vouchers — are income-based grants for eligible children in kindergarten through the 12th grade. Since the program first began in the 2014-15 school year, Opportunity Scholarships have provided up to $4,200 annually so that children from lower-income families can attend a participating private school which better suits their individual educational needs.

Families can use these vouchers to help pay for school tuition, transportation, equipment and other necessary expenses. In the 2019-2020 school year, the average voucher awarded was $3,917; the average K-12 private school tuition in North Carolina is $9,867. Parents typically pay the difference out of their own pockets.

Year over year, the program has proven increasingly popular with North Carolina’s families. Participation has grown nearly tenfold from its inception, with 12,183 students in North Carolina who receive Opportunity Scholarships currently enrolled in private schools (just over one half of one percent of the school-aged population). 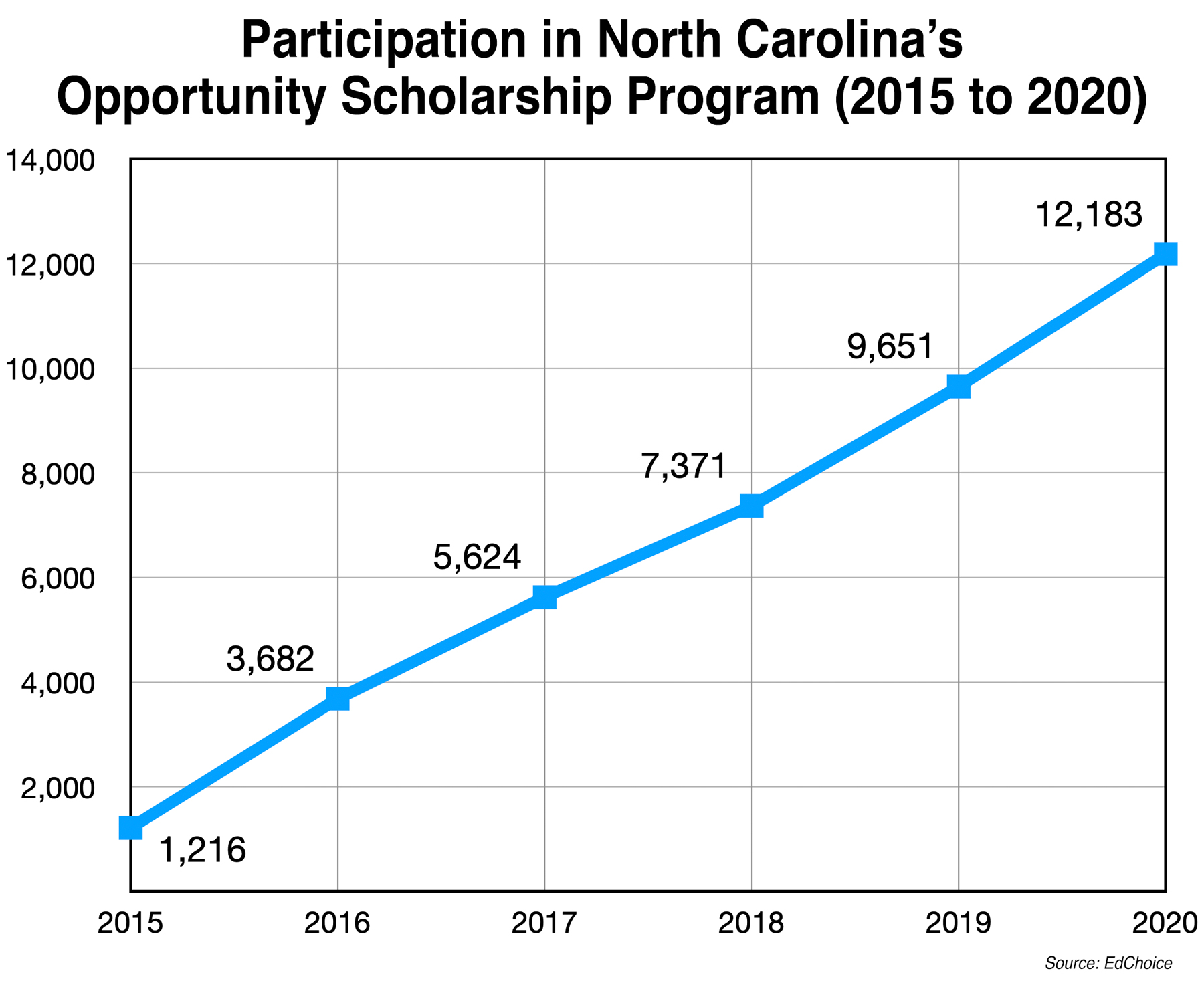 Demand for the program has consistently been far greater than the number of scholarships available; nearly 20,000 families applied for the scholarships in the 2019-2020 school year for 4,000 available spots. 508 of North Carolina’s 751 private K-12 schools (68%) now accept students with Opportunity Scholarships.

House Bill 32, the “Equity in Opportunity Act,” would tie these individual grants to a percentage of the state’s portion of the prior year’s “per-pupil expenditure,” rather than the existing (and arbitrary) fixed dollar amount of $4,200. The change would similarly affect the calculation of Education Savings Account grants that are awarded as a result of a student’s disability.

What is the per-pupil expenditure?

The per-pupil expenditure is the average amount that taxpayers spend on each public school student in a given school year. In the United States, K-12 education is funded from three sources: federal tax dollars, state tax dollars, and local tax dollars. In North Carolina, the federal government provides about six percent of K-12 funding, with state government picking up most of the tab at 69 percent. County governments (and certain municipalities), on average, contribute approximately a quarter of the total cost of educating our children. (There is a wide range of local education dollar amounts budgeted by North Carolina’s counties and municipalities. According to North Carolina’s Department of Public Instruction’s Statistical Profile, the local government with the lowest contribution, Robeson, spends $743 per student, while the Chapel Hill/Carborro City Schools spends $6,223 per student). 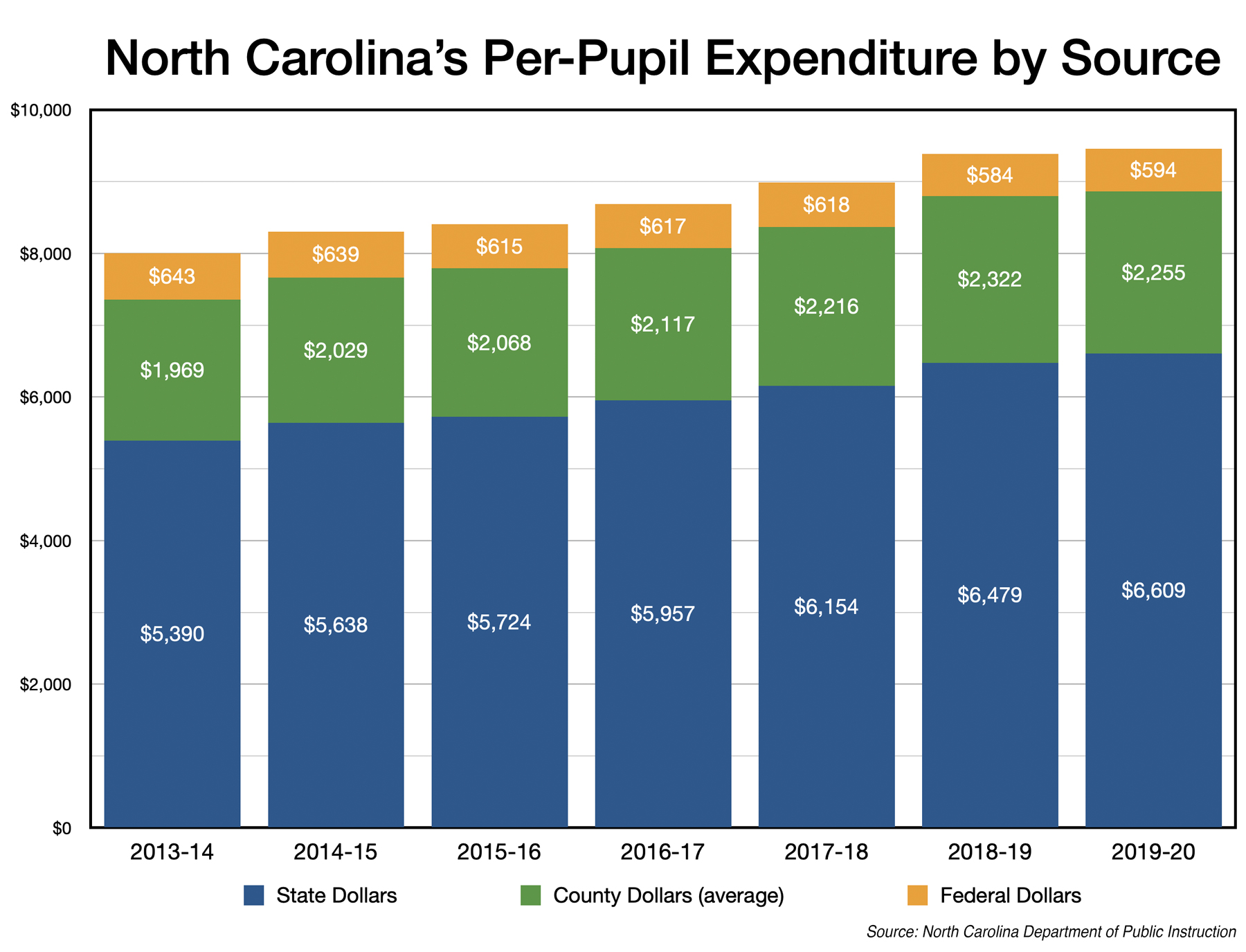 According to the Department of Public Instruction’s 2019-20 School Expenditure Data, 93.6 percent of North Carolina’s share of education expenditures go directly to paying the salaries and benefits of public school employees (including teachers, administrators, and a wide array of support staff).

The Opportunity Scholarships’ current fixed dollar amount equates to about 60 percent of the state’s portion of the per-pupil expenditure. House Bill 32 also calls for increasing this percentage to 70 percent in the first year and then steps it up to 80 percent in the second year, where it remains. The percentage approach can provide either an immediate increase or reduction of the scholarship amount based upon the prior year’s state per-pupil expenditure amount. According to the legislation’s sponsors, it also clearly conveys that this is less than the amount being paid if the child was attending traditional public school.

To qualify for an Opportunity Scholarship, a family must have a household income level of no more than 150 percent of the amount required for the student to qualify for the federal free or reduced-price lunch program. (The General Assembly raised this threshold from 133 percent in last year’s House Bill 1105 [Section 3.3(c)(page 36)], expanding Opportunity Scholarship eligibility to more students in North Carolina starting in the spring semester of 2021.)

The legislation is seen by parental choice advocates as the latest move in what has become a nationwide trend to prioritize students over systems. Parental choice is where parents have the freedom to choose where to send their child to school.

This trend has accelerated over the course of the last year as a result of public school closures in response to the coronavirus pandemic. In contrast, private schools across the country and in North Carolina have remained open.

According to a poll commissioned earlier this year by the Civitas Institute, the vast majority (82%) of North Carolinians believe that parents should be able to select the school that their child attends; just 29% of the nearly 1,000 of those surveyed (bipartisan voters with children currently enrolled in K-12 public schools) said they would choose a traditional public school if location and cost were not factors.

Support for school choice was similarly echoed in a poll commissioned by the Carolina Leadership Coalition last year.

“Right now vulnerable students receiving a publicly funded education are not able to benefit from their county’s commitments to classroom funding like their peers,” the statement concludes. “Our students deserve a policy where their state and local governments can support all of their children equitably.”