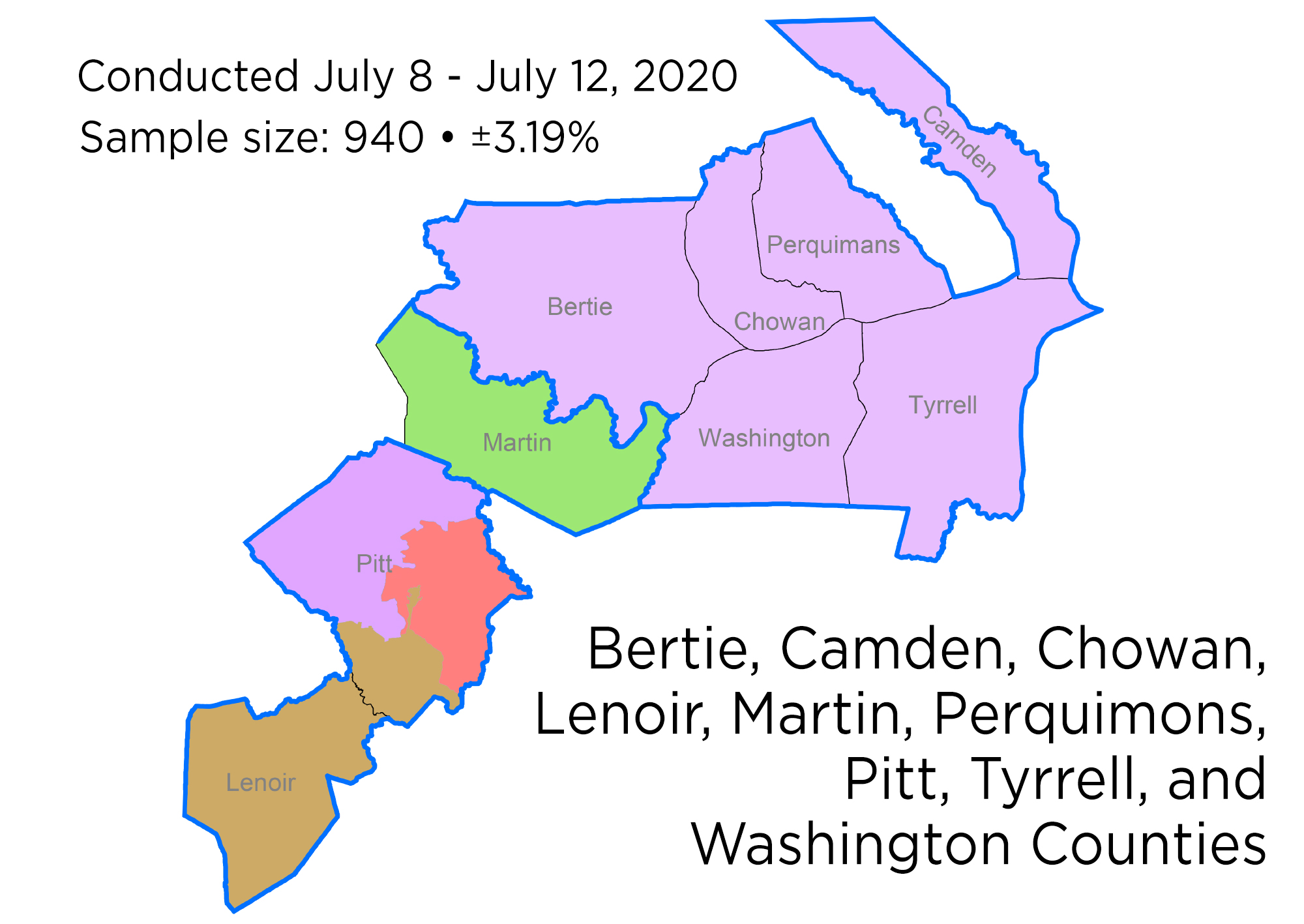 A majority of respondents in the Coastal Region live in rural areas, at 52.7%. 35.9% were suburban voters, and 11.4% lived in an urban environment. Just 20.2% identified as “suburban women,” a key demographic in the upcoming presidential election.

80% of those surveyed in the Coastal Region reported an annual income of $100,000 or less. Educational levels were more evenly distributed in this group, with 25.1% reporting having a college degree, 16.7% with some college experience, and 20.6% having a high school degree or less. 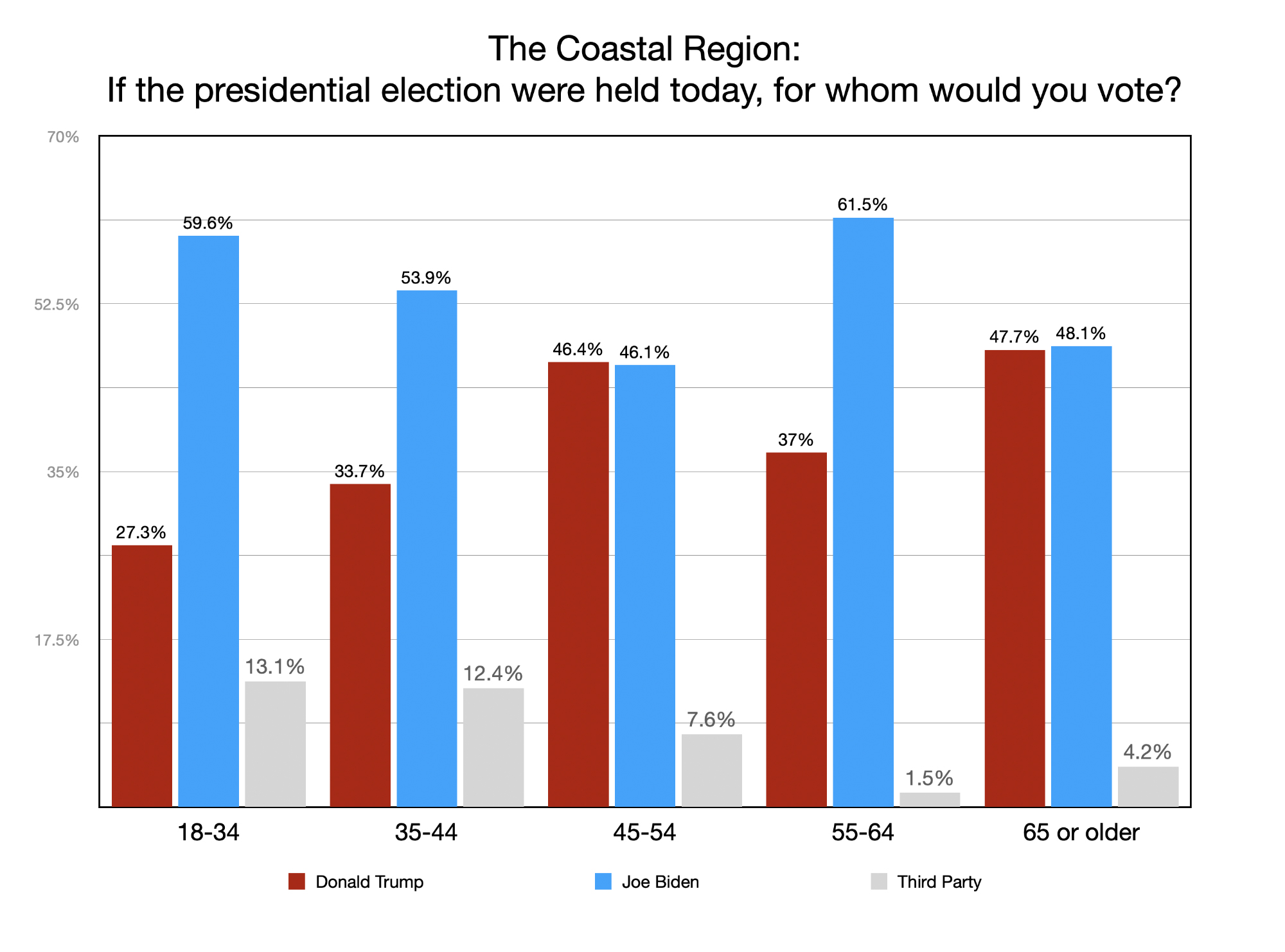 When analyzed by age range, Mr. Biden led Mr. Trump with sizable majorities in every age grouping except those voters 45 to 54 years old and those voters 65 years or older, where they were essentially tied in both cases.

A majority (59.1%) of survey respondents in the Coastal Region felt that the public health impact of the COVID-19 pandemic was of greater concern than was its economic impact. 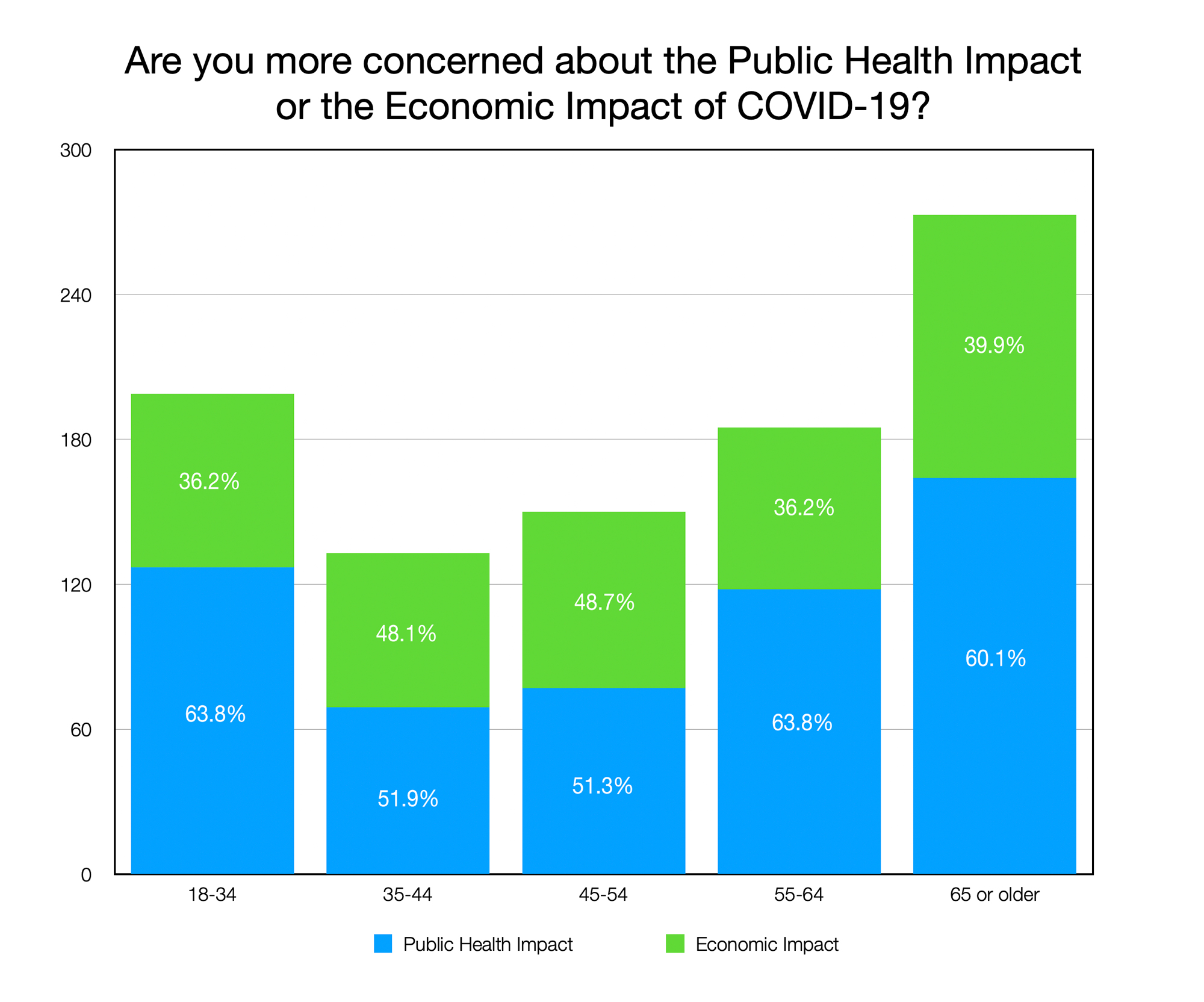 When broken down by age, significant majorities existed in almost all ranges who felt that the public health impact was of greater concern, with the exception of those between 35 and 44 years of age and those between 45 and 54 years of age, whose majorities were much narrower, at 52% and 51.3%, respectively.

In response to the coronavirus outbreak, Governor Roy Cooper mandated a statewide shutdown. This has caused significant economic loss as travel and tourism has drastically decreased. Which position best represents your view about the shutdown?

Thinking about the recent killing of George Floyd by a white police officer, do you support or oppose the protests that have happened across the country as a result?

95.2% of Black voters in the Coastal Region support the protests and a slight majority (52%) of white voters oppose them.

Similarly, varying but significant majorities support the protests across all educational levels.

As is the case in other regions across the state, a significant majority (in this case 75.9%) of Republicans opposed the protests, while 91% of Democrats and 63.4% of Unaffiliated voters supported them. A majority (58.9%) of rural voters supported the protests, while urban and suburban voters showed even stronger support, at 79% and 72.8%, respectively.

Overall, voters in the Coastal region have the highest degree of support for the protests.

Respondents were asked the question “Do you agree or disagree that the rioting and looting that has occurred during the protests is justified to bring about necessary changes?” 77% of those surveyed disagreed that riots and looting are justified.

Voters of all age groups in the Coastal Region disagree that rioting and looting are justified, as do men (81.2%) and women (73.9%)

The only demographic group in the Coastal Region who believe that the riots and looting are justified are those identifying as “very liberal,” at 64%.

This is the fourth and final article in a series of four that will summarize the findings of polls commissioned by the Carolina Leadership Coalition over the summer. These polls were conducted by an award-winning national public opinion and predictive analytics firm which surveyed likely general election voters in four discrete geographic regions of North Carolina. You can download the full model results for the Coastal region here.